Paisley Park may be the current 7/2 favourite in the Cleeve Hurdle betting, but 4/1 shot Midnight Shadow is already trading at shorter odds to win the Cheltenham Festival race for which it’s considered a trial, the Stayers’ Hurdle.

Sue Smith’s six-year-old steps up to 3m for the first time against a classy field chock full of rivals proven at the distance, but the William Hill traders are already 10/1 about him winning the March Grade 1 after a promising victory in the Cotswolds on New Year’s Day.

He’s fully expected to advance his claims on Trials Day and here’s why. 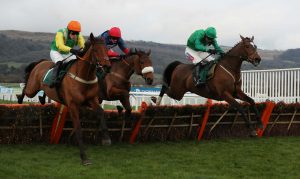 Check out our horse racing betting tips, for the latest odds on this weekend’s action.

First up, Midnight Shadow is already the second highest-rated horse in the Cleeve, after Sam Spinner, whose hurdling appears to have gone AWOL since he burst onto the scene last term.

His official rating rose fully 12lbs to the lofty mark of 158 off the back of beating the re-opposing Wholestone, as well as Old Guard in the Relkeel Hurdle over 2m4f at Cheltenham a little over three weeks ago.

By putting those two away with a degree of comfort (the latter was third in last year’s Stayers’ Hurdle) he has proven he has the class to score in this company. Now he has to prove he stays.

Smith’s six-year-old is the youngest horse in the race and one of only two, alongside 4/1 co-second favourite Black Op, that’s yet to taste 3m under rules.

However, while the son of Midnight Legend has yet to prove his credentials over this stamina-demanding trip, a look through his sire’s progeny hints he should relish the step up.

His most illustrious half brother is a certain Sizing John, who stepped up from being an excellent 2m chaser to win the ultimate stamina test, the Cheltenham Gold Cup in 2017.

Other classy stayers with which Midnight Shadow shares a father include Cotswold Chase scorer Midnight Chase and fellow Grade 2 winner Seeyouatmidnight, who was third in a Scottish Grand National.

With classy back form over shorter trips including his recent Grade 2 success at the track and his upset win in the 2018 Scottish Champion Hurdle, Midnight Shadow looks to have the right combination of class and stamina-promising genes to take the Cleeve Hurdle.

As such, it may be worth helping yourself to some of the 10/1 about our Cleeve Hurdle betting tips’ selection to win the Stayers’ Hurdle before he does so and it disappears.