Patrick Mullins will take the ride aboard 8/1 shot Mall Dini in the Thyestes Chase at Gowran Park this Thursday in a turn of events that could be of interest in terms of Cheltenham Festival ante-post odds.

Bet on the Thyestes Chase with William Hill 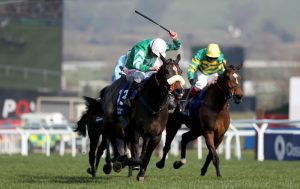 Mall Dini ridden by jockey Davy Russell on their way to winning the Pertemps Network Final.

At first glance, Mullins’ booking to ride Pat Kelly’s nine-year-old may not seem that out of the ordinary – he went down by a half a length aboard the gelding in last year’s Fulke Walwyn Kim Muir Challenge Cup Amateur Riders’ Handicap Chase at the Festival.

However, his father Willie had a whopping eight runners left in the Thyestes Chase after Wednesday’s declaration stage for a race that both generations of the Closutton operation have stated is extremely significant to them, being the feature of the year at their local track.

Mullins’ lowest riding weight in the past 12 months is 11 stone, meaning he could’ve potentially ridden any of family-trained entrants Pleasant Company (14/1), Invitation Only (11/2 fav), Pairofbrowneyes (14/1) or Up For Review (10/1).

Having told reporters “it’s [the Thyestes] a race I would love to ride in. There is so much local history around it. If I could choose one chase to win in Ireland, it would be the Thyestes,” Patrick’s decision to ride Mall Dini could simply be construed as getting himself the most-fancied mount possible.

Yet his booking is enough to prompt a casual check on the 2016 Pertemps Final winner’s odds in the Cheltenham Festival’s amateur rider’s chases and find he’s been cut five points from 25/1 to 20/1 for the four miler, while remaining unchanged for the Kim Muir at odds of 14/1. 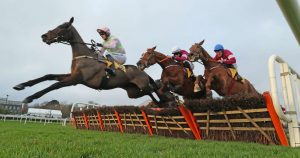 Will Patrick Mullins impress again in this Thursday’s races?

With two potential ports of call for Kelly’s chaser at the Cotswolds spectacular, if Mullins is to ride against his fellow amateurs, the more risk-averse bettor may prefer taking 12/1 about Mall Dini in the ‘to win any Cheltenham Festival race’ market.

It could pay to be bold in putting all eggs in the National Hunt Novices’ Chase basket though, with the nine-year-old having failed to win the Kim Muir off a mark of 143 for the last two years and currently rated five pounds higher than that by the handicapper.

Still a novice, having somehow failed to win over fences in 12 attempts, Mall Dini would likely be one of the highest-rated animals in the four miler, a contest in which horses compete off level weights.

Mullins, the younger has won the race twice previously, including with his father’s Rathvinden in 2018, with the grey scoring at the grand old age of 10.