Royal Ascot is the Olympics of flat racing, but for many participants, attendees and viewers around the world, the patronage of Queen Elizabeth II and the House of Windsor is what makes it special.

Over the many years of Her Majesty’s keen involvement in the meeting, Queen’s hat betting, whereby bets are placed on the hat she wears on each of its five days, has become tradition.

In a week in which it’s expected that £150m will be wagered on the spectacular across the country, Pink and Blue are already co-favourites in the Queen’s hat on Tuesday betting at odds of 3/1.

However, among the insights news.williamhill.com Queen’s hat research has unearthed is a viable alternative for the day one magisterial millinery at double the price.

Queen’s hat betting trends: Her Maj mellowing to yellow early in the week 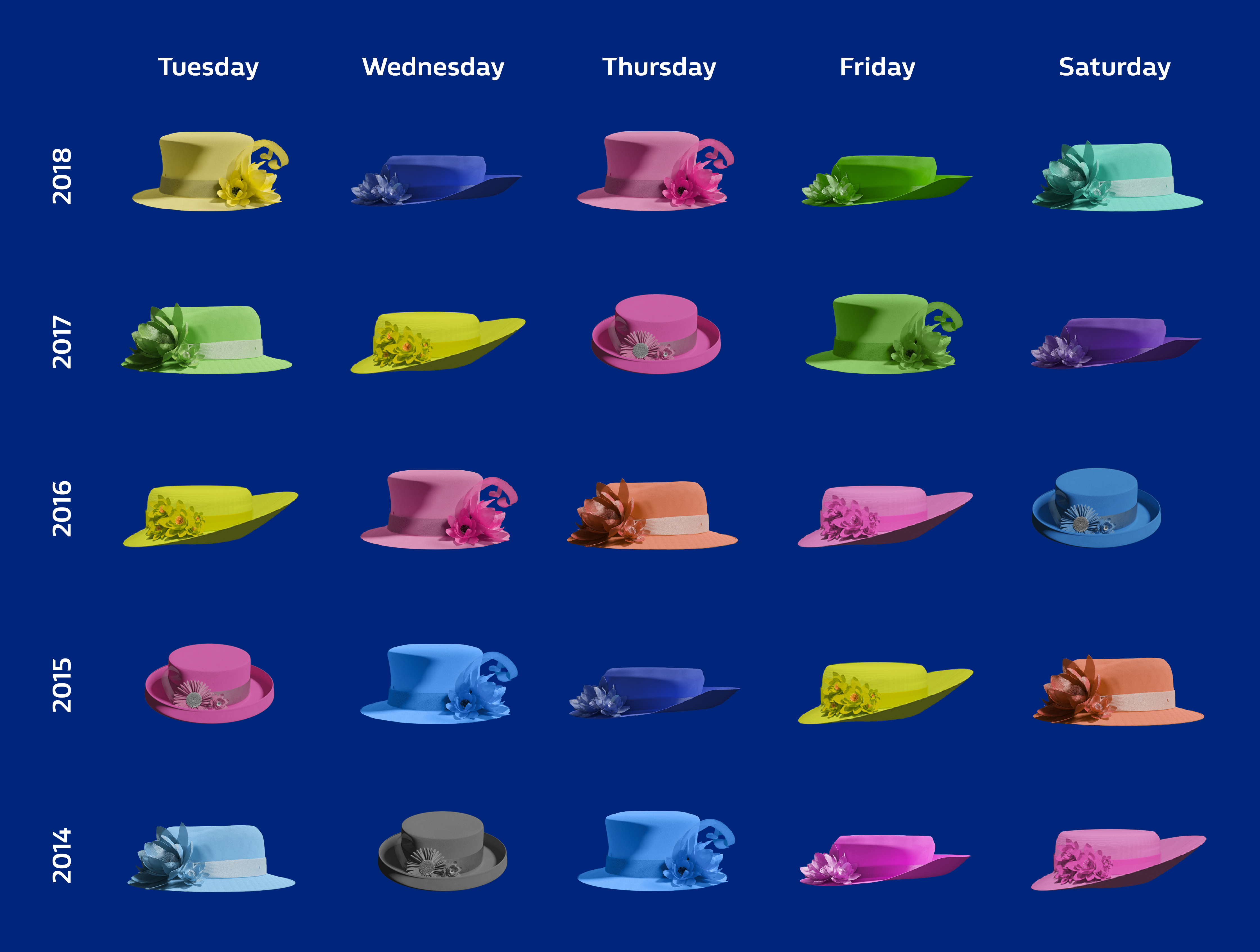 Pink and Blue dominate the hues when it comes to the last five years of the ruler’s headgear, amounting to an impressive 13 of the 25 hats she’s donned at Royal Ascot during the timeframe.

Naturally among that bakers’ dozen there have been lids of that have pushed at the very end of those definitions, from magenta to duck egg, according to international colour authority Pantone.

Yet, in Queen’s hat betting terms, broad strokes are required when it comes to definition to avoid tired traders pricing up every shade on the visible spectrum.

Next in terms of popularity is the rather-less-tricky-to-distinguish yellow, which has adorned the royal dome at the meeting for four years in succession following a blank in 2014.

This has particular pertinence for those interested in getting their week off to a flyer before a horse has broken from the stalls courtesy of the Queen’s hat on Tuesday betting odds.

The colour of the canary has now featured within the first two days of each of the last three meetings, including Tuesday showings in 2016 and 2018. Odds of 6/1 are available about her Majesty kicking off the 2019 festivities in Yellow.

Green may have accounted for only three of the past 25 Queen’s hats at Royal Ascot, but it has to be a colour to watch having made each of those appearances inside the last two meetings.

Pale and lusher varieties were employed in a two-pronged attack on the 2017 event, while backers once again trousered the readies on the Friday of the 2018 edition.

Indeed, those went back on the same shade the following day were left green around the gills when all bets were ruled losers after Her Majesty arrived topped with a tone resident of an indiscernible hinterland between the up-and-coming colour and grey.

Regardless of your take, it’s difficult to deny green appears to be a bit of a favourite for HRH at present.

As well as being a staple of Elizabeth II’s Royal Meeting millinery over the last five years, pink has been her choice on Ladies’ Day (on which the Ascot Gold Cup is the highlight) in both 2017 and 2018.

Check out all the Royal Ascot betting odds at William Hill