Of the 11 Test matches that New Zealand have played in 2018 so far, they have scored 30+ points in 10 them. This feat has been achieved in each of their last nine, which includes the All Blacks putting 69 points past Japan in their final warm-up ahead of their Twickenham clash with England.

New Zealand’s odds are wagering at a fair 1/6 to beat an England side that relied solely on penalties to somehow sneak a 12-11 victory over South Africa, in a game where the Springboks should have been out of sight by halftime.

England have only won once in 15 clashes with the All Blacks since their 2003 Rugby World Cup triumph and Eddie Jones’ men seem plenty short enough at 4/1 in our England vs New Zealand predictions to gain just a second success over them in 15 years.

One thing is clear that if a steamrollering is to be avoided, the hosts will need to score tries to compete. What’s more, the performance of Elliot Daly at fullback will be critical.

Why not check out our match bets on the England vs New Zealand game? 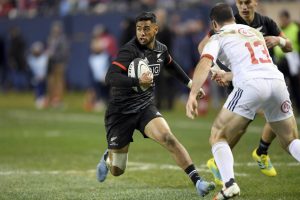 Maori All Blacks Reagan Ware will fancy his side to win against Eddie Jones’s men.

Daly has played on the wing and at outside centre for England under Jones and he is arguably most at home in the latter position.

He has pace and a left foot capable of punting the ball miles. Not only is he an asset in terms of converting long-distance penalties, but in terms of finding touch when required.

However, against South Africa, he occupied the role of fullback and it showed that this wasn’t a position that he had much recent experience of playing.

Daly was peppered with high balls, particularly in the first half and struggled. Sbu Nkosi was especially dominant in such scenarios and New Zealand are sure to adopt this gameplan early on to test the Wasps man again.

South African flyhalf Handre Pollard is a good kicker, but Beauden Barrett is arguably even more accurate and any bombs he sends in Daly’s direction will be challenged for by capable catchers in wingers Rieko Ioane and Waisake Naholo.

Should Daly suffer in the same way again, our England vs New Zealand predictions forecast the visitors to be much more ruthless. It is little short of a miracle that England got out of the first 30 minutes with South Africa with the scoreline at 3-3.

Why not read our England vs South Africa predictions to see how Eddie Jones’s men fared last week?

Making New Zealand our pick to win at 1/6 is not the most appealing prediction for the Twickenham showdown, but the 4/9 double result on the All Blacks leading at both half-time and at the final whistle is better.

After all, they did run in five tries in the opening 40 minutes against Japan.

Alternatively, the odds are trading at 2/5 that the All Blacks are the first team to register a try, and given England’s struggles early on against the Springboks, this looks like banker material.