The second day of the Cheltenham Event is Ladies Day, and there’s something for everyone with seven more fantastic races.

There are four Grade 1 contests, starting with the Ballymore Novices’ Hurdle at 1:20, where the Irish trainers hold a strong hand. Paul Nicholls’ Bravemansgame looks to be the strongest home contender.

Then there’s the day’s feature race – the Queen Mother Champion Chase. The market is dominated by Chacun Pour Soi, but previous winners Altior (2018 & 2019) and Politologue (2020) will look to have their say.

Monkfish to leap to Cheltenham glory?

Formerly known as the RSA Chase, this year’s Brown Advisory Novices’ Chase could be a platform for a rising Gold Cup contender.

Bobs Worth won this race in 2012 before winning the Gold Cup a year later, while Lord Windermere did the same. Last year saw Champ storm home late on, and he could head to this year’s Gold Cup.

But before we get ahead of ourselves, Willie Mullins’ rising star Monkfish must see off his rivals in this. He’s won his last six races, including his last three over fences. He wowed viewers with an 11-length victory in the Flogas Novice Chase at Leopardstown last month, where a change of tactics saw him make all.

He’s already got Cheltenham Event form after winning the Albert Bartlett Novices Hurdle last year. The seven-year-old is odds-on for victory, so can anyone stop him?

A clash of former champions and a talented rival

If you look at the market, then you’ll see that this year’s Queen Mother Champion Chase revolves around Willie Mullins runner Chacun Pour Soi.

The nine-year-old has won four Grade 1 races for the Closutton trainer in seven starts since his move from France.

This season’s three wins have been by a combined distance of 33-and-a-half lengths, including an emphatic eight-length triumph in the Dublin Chase, where he travelled smoothly and jumped well before going through the gears.

Over the years, this race has proved elusive for Mullins – an omission in his otherwise glittering training career. Can Chacun Pour Soi put things right?

In opposition are two former winners – Altior and Politologue.

Two-time race winner Altior heads straight to the Event after his second in the Desert Orchid Chase over Christmas. Nicky Henderson declared a run at Newbury could take the edge off him, so could he recapture some of his old spark?

Last year’s victor Politologue looks to join the likes of Badsworth Boy, Viking Flagship and Master Minded in winning the race in consecutive years. He was second in the Clarence House Chase last time, where First Flow had first run and stayed on strongly. Can the grey spring another surprise?

Get the latest Champion Chase odds

The winning runners and riders from Ladies Day 2020

It was the second double in as many days for Nicky Henderson, as his runners claimed the RSA Novices’ Chase and the Coral Cup. 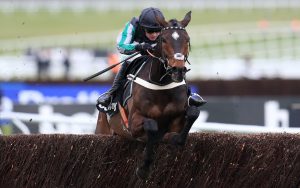