Which is the most experienced squad at this summer’s Euros?

The steely-eyed squads shuffling in the tunnel, the pulsating tension, the patriotism, the fans! That’s right, the EUROs is finally upon us and, boy, do we have our game faces on.

And while we could sit idly by and let you entrust in folklore that Germany is the most experienced squad (they’re all veterans, right?) and that England are sure to go sailing through the group stages, we wanted to give you the best chance of making an informed decision. And that means starting with arguably one of the most vital aspects of any international game: experience*.

Who is the most experienced squad at this year’s tournament? And which are the highest value EURO 2020 odds as a result?

Most experienced squads at this summer’s Euros 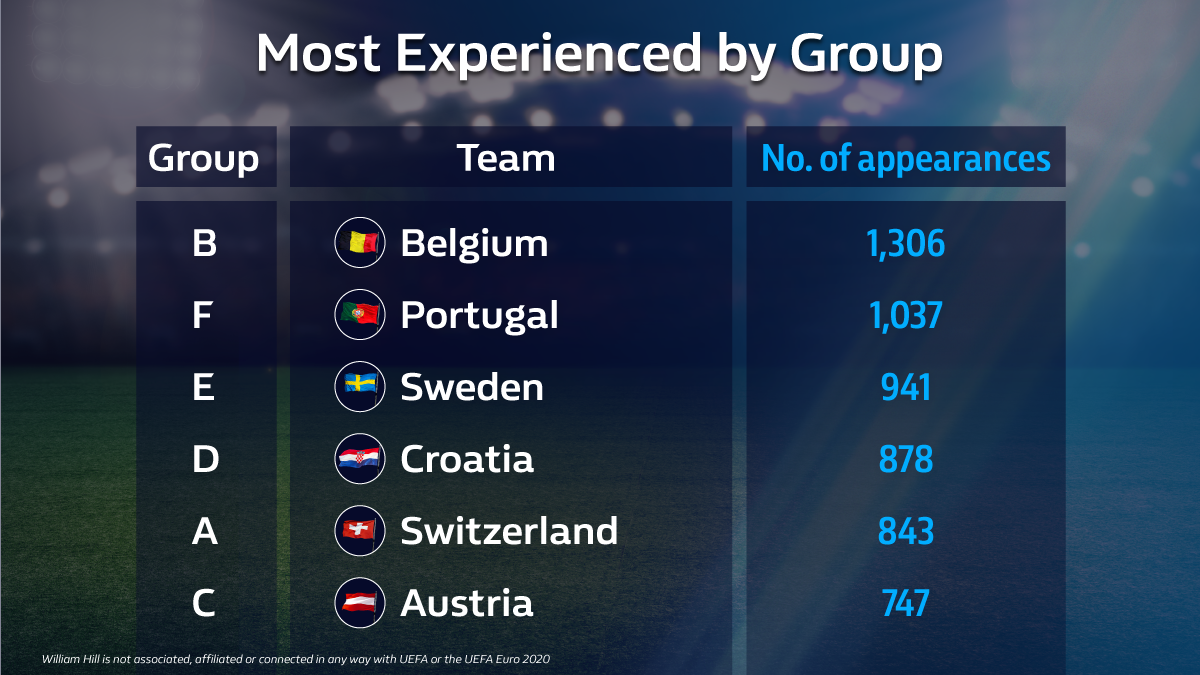 Belgium, the world’s top-ranked team, are officially the most experienced squad at EURO 2020 with 1,306 total international caps, followed by 2016 winners, Portugal (1,037) and reigning world champions, France (1,003).

Without a major trophy to their name, could this be Belgium’s year? Their squad certainly couldn’t be more prepared to perform on the big stage.

When we review at a group level, Switzerland is the most experienced in Group A, Belgium (Group B), Austria (Group C), Croatia (Group D), Sweden (Group E) and Portugal (Group F).

Does this make the respective squads the favourites? Yes and no. 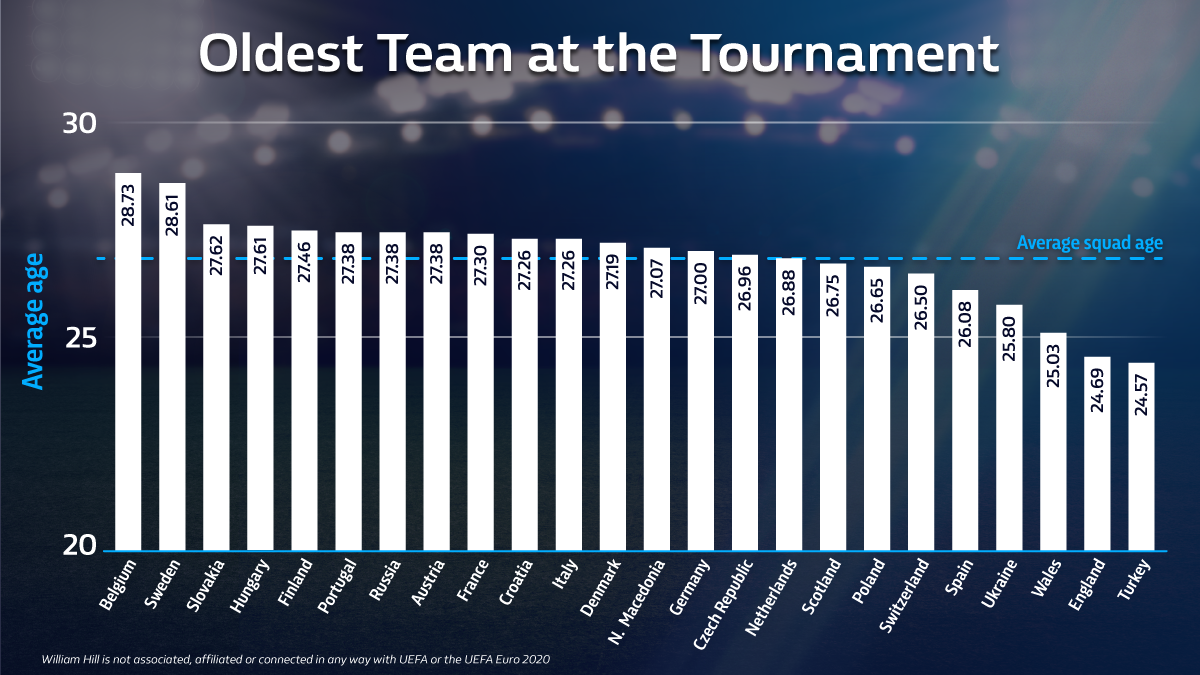 While these are the most experienced squads at EURO 2020, many have also been around the longest. For Belgium in particular, this is certainly true (they are also the oldest squad at this year’s tournament with an average age of 28.73).

If you are inclined to bet on experience and reliability at an international level, Belgium (6/1), Portugal (8/1) and France (9/2) offer good value. If your wagers depend on fresh legs and a hunger to gain headlines, you may want to turn your attention to the sprightlier squads of Turkey (24.57), England (24.69) and Wales (25.03). Dealer’s choice. 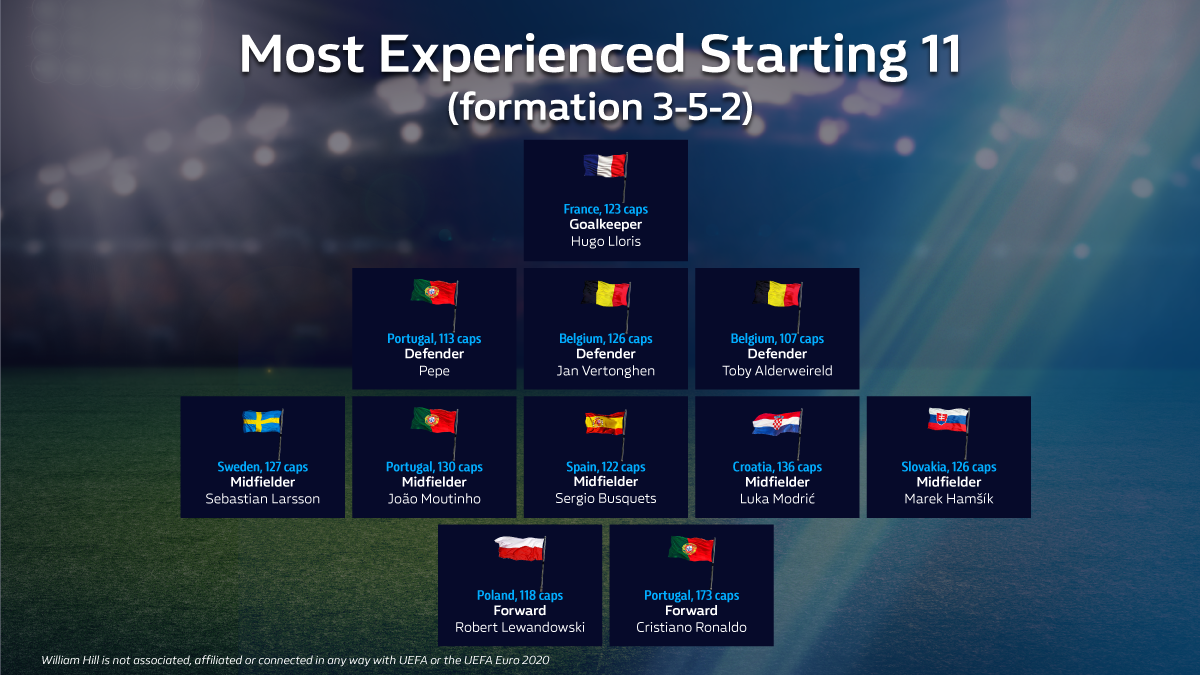 If you’d like to place your bets by formation, Portugal (8/1) may be your dream choice, with three of their key players comprising the core of our EURO 2020 fantasy football squad. 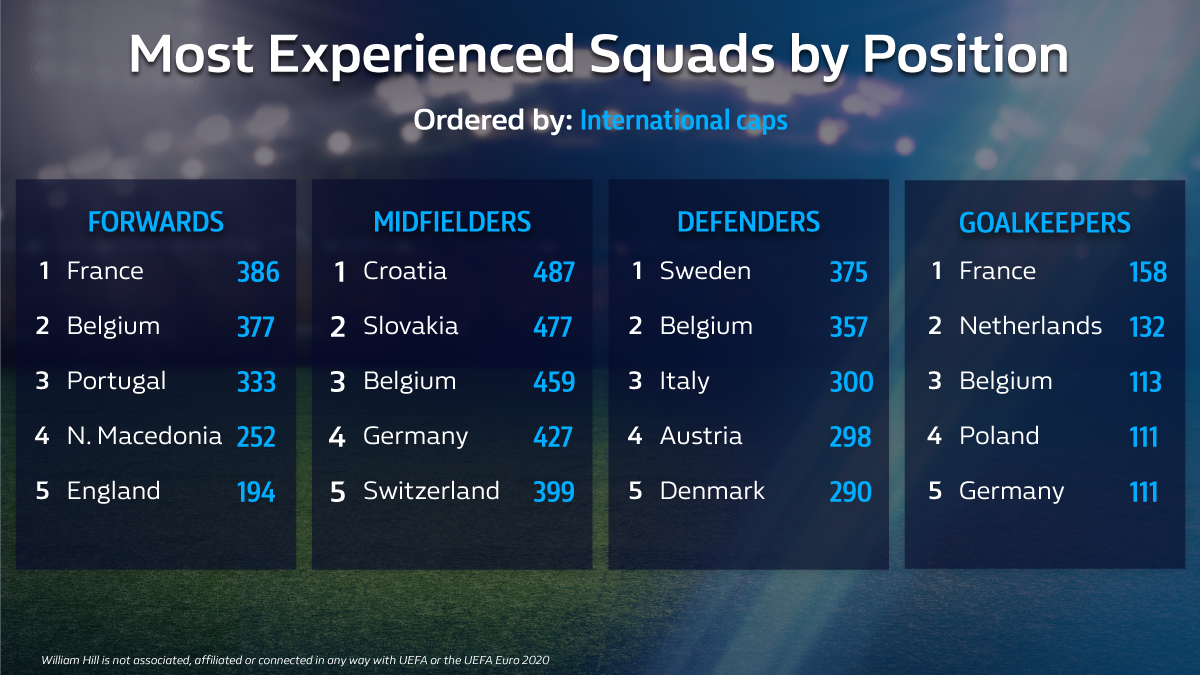 Midfield is a position favoured by the most experienced players at the Euros, followed by defenders, and forwards. Goalkeepers, have the lowest figures but, with only three possible keepers permitted per squad, aren’t necessarily the least experienced overall.

The team with the most experienced midfield is England’s inaugural opponent, Croatia, with Modrić set to continue his playmaking dynasty in the middle of the park. England, on the other hand, has the least experienced midfield due to Southgate’s preference for youth, although Henderson with 58 caps and aged 30 is the unequivocal main man of our midfield going into the Euros (fingers crossed he passes his late fitness tests).

Highest goalscorers at this summer’s Euros 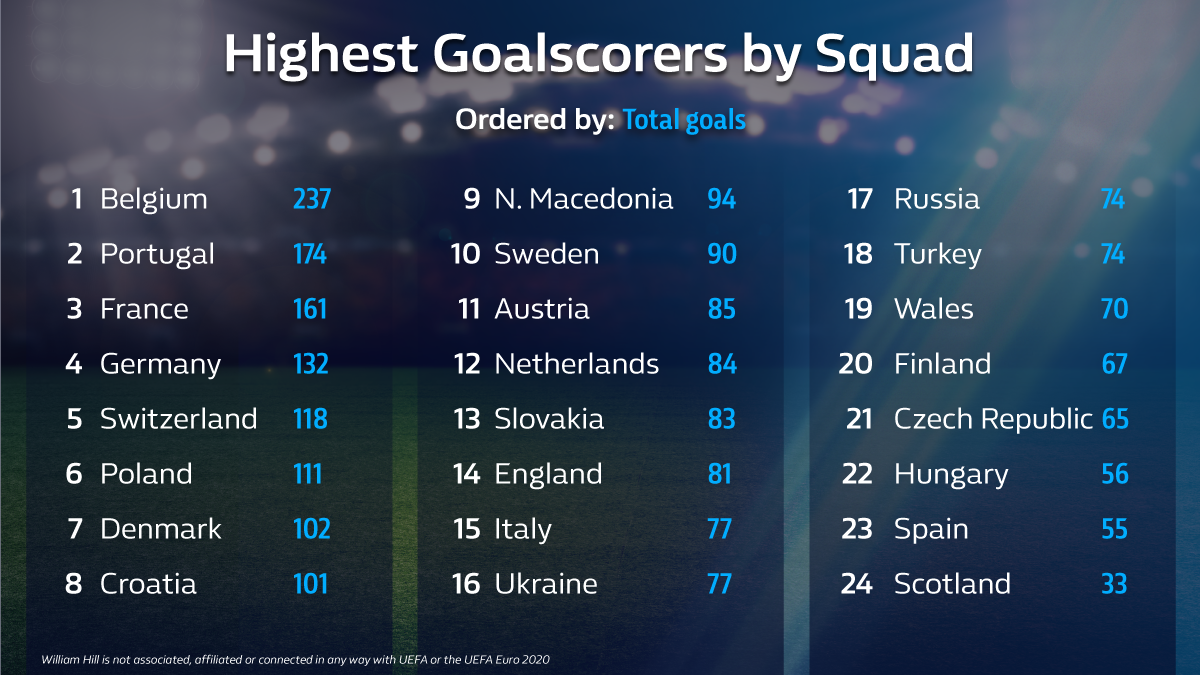 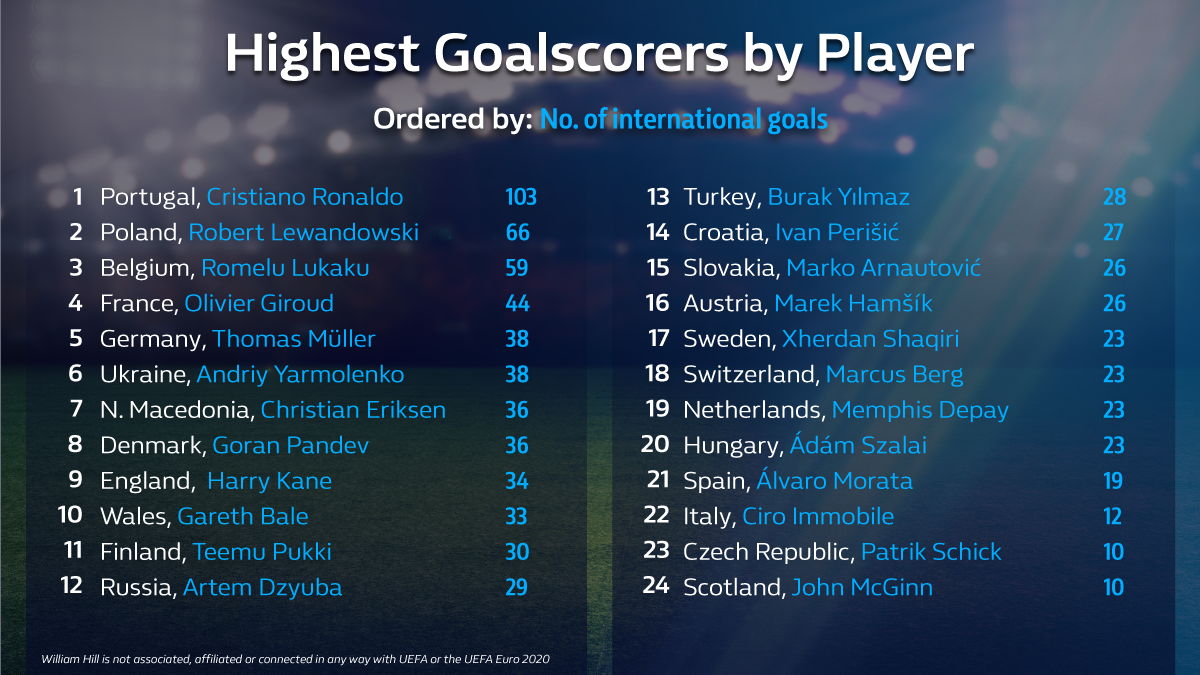 Tune in to Belgium’s games if you want to see a free scoring side in all their glory. With 237 total goals shared throughout the squad, they’re head and shoulders above the next highest scoring, Portugal.

A bitter twist of fate, perhaps, for Ronaldo fans who, despite being hands-down the man to watch for individual goals (103 in total), the combined back-of-the-net behemoths of Lukaku (59 goals), Hazard (32), Batshuayi (22), Mertens (21) and De Bruyne (21) has the Ballon d’Or hot-stepper beat.

Ronaldo does still come out top in terms of international appearances (173) and has the most impressive player strike rate, averaging 0.595 goals every game. As for England fans, it’s finally time to rejoice; Harry Kane claims the 2nd favourite strike rate of the competition (0.586) and also has the best Golden Boot odds (6/1), followed by Lukaku (7/1) and Mbappé (9/1). But don’t dismiss Lewandowski who, with outside odds of 25/1, could be a high value bet for a veteran goalscorer.

To stake your wager and stay close to the action as it unfolds, check out the William Hill EURO 2020 football odds.

*Experience was calculated by international caps. All caps and goals data are correct as of 1st June 2021