The stubborn persistence of good ground at Wetherby has diluted the quality in this year’s Charlie Hall Chase predictions, which should play right in to the hands of Brian Ellison’s Definitly Red.

Entries for Thistlecrack and Bristol De Mai have fallen by the wayside in the week leading up to the race due to a lack of give underfoot, while Gordon Elliott’s Outlander, Alpha Des Obeaux and Don Poli have all failed to RSVP.

Prior to Friday’s declarations, money had been coming for Paul Nicholls’ admirable win machine Black Corton, whose record of seven wins from 10 runs on good going makes compelling reading.

However, the seven-year-old, who enjoyed such a fruitful partnership with Bryony Frost last season, appeared to hit a glass ceiling in terms of quality in the spring festival Grade 1s and it could be worth taking him on with a rival already proven at the highest level.

Five horses are expected to go to post for the Wetherby Grade 2 and they are as follows. 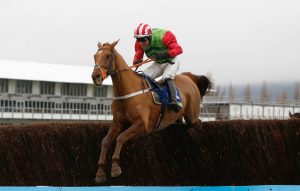 Bet on the Charlie Hall Chase with William Hill

Official ratings are rather a blunt instrument for getting to the kernel of a trappy little contest such as this and looking at it from such a perspective, the eye is instantly drawn to Double Shuffle.

Tom George’s eight-year-old receives at least 3lbs in weight from each of the other four runners, yet has at least 5lbs in hand on all bar Definitly Red based on their handicap marks.

Brian Ellison’s gelding must concede the George inmate 6lbs, but his official rating has far greater substance to it in our Charlie Hall Chase predictions than the one ascribed to the bottom weight.

Double Shuffle’s mark leapt 15lbs thanks to a length second to Might Bite in the 2017 King George, which remains an enormous outlier on a CV that includes just four wins, with none coming above Class 2 handicap level. 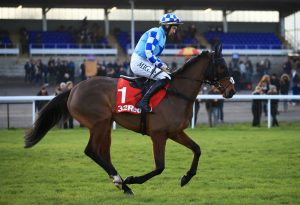 Double Shuffle ridden by jockey Adrian Heskin looks to be in the running for the 2018 Charlie Hall Chase predictions.

Definitly Red, on the other hand, struck twice at the Grade 2 echelon last term, as well as landing the Grade 3 Rowland Meyrick Chase over the Charlie Hall course and distance the season before, with Blaklion back in third that day.

While the best of his efforts last term came on heavy ground, he posted that 2017 Wetherby success on good-to-soft going and the fact that his trainer runs him on good ground for only the second time in his career here, speaks volumes for how winnable the race appears to be.

Whereas Double Shuffle has an extremely moderate win record, Ellison’s steeplechaser has one to rival that of Black Corton, winning 12 of his 25 starts under rules to the Nicholls horse’s 13 in 24.

Given not much separates them in the betting, it may seem too perverse to ignore the latter given the superb sequence he racked up under Frost last term.

However, it’s perhaps telling that, despite a run of five wins and a silver medal from six races between October 2017 and February of this year, his official rating only went up 5lbs.

Of the remainder of the opposition to our Charlie Hall Chase predictions, the unfathomable Regal Encore is very much the law of the sod selection.

The clear outsider of the field has been scattering strong showings at substantial odds amongst his pulled-up efforts over the last couple of years, including when third in last year’s Ladbrokes Trophy (formerly the Hennessy) trading at 66/1.

Click here to create a William Hill account; we’re offering new customers £30 in free bets when you wager £10 on any game.