The most successful women’s singles players in Grand Slam history

Following a shock defeat by Maria Sakkari in the Western & Southern Open, Serena Williams will be itching to bounce back at the US Open next week.

The extra significance this year is that Williams, the most decorated player in the Open era, can equal Margaret Court’s all-time record of 24 Grand Slam singles titles if she takes the crown in New York.

Ahead of the US Open’s start, we’ve counted down the five most successful women’s singles players in Grand Slam history.

Largely thanks to her dominance the Australian Open, where she won 11 titles in the space of 14 years, Margaret Court remains the highest achiever of all time in women’s tennis with her 24 Grand Slam singles titles.

The tall Aussie was dangerous at the net and second to none when it came to power and precision volleying.

Much like Williams, she was lauded for her mobility despite being a big, powerful opponent.

Alongside her 11 Australian Open titles, Court racked up five French Open titles on the clay, five US Opens and three Championships on the hallowed turf at SW19, Wimbledon.

Revered as the greatest ever women’s player, though still one short of Court in terms of Grand Slams, Serena Williams has dominated the Open era with 23 Grand Slam singles wins.

The American has won over half of those 23 titles in the last decade, while the US Open was the scene of her first big win in 1999, though she is without a Grand Slam since the 2017 Australian Open.

Williams must overcome a shock defeat to Maria Sakkari in her preparation for the tournament, but she clearly has the ability to win a seventh US Open, which would also be a new record for the Open era. 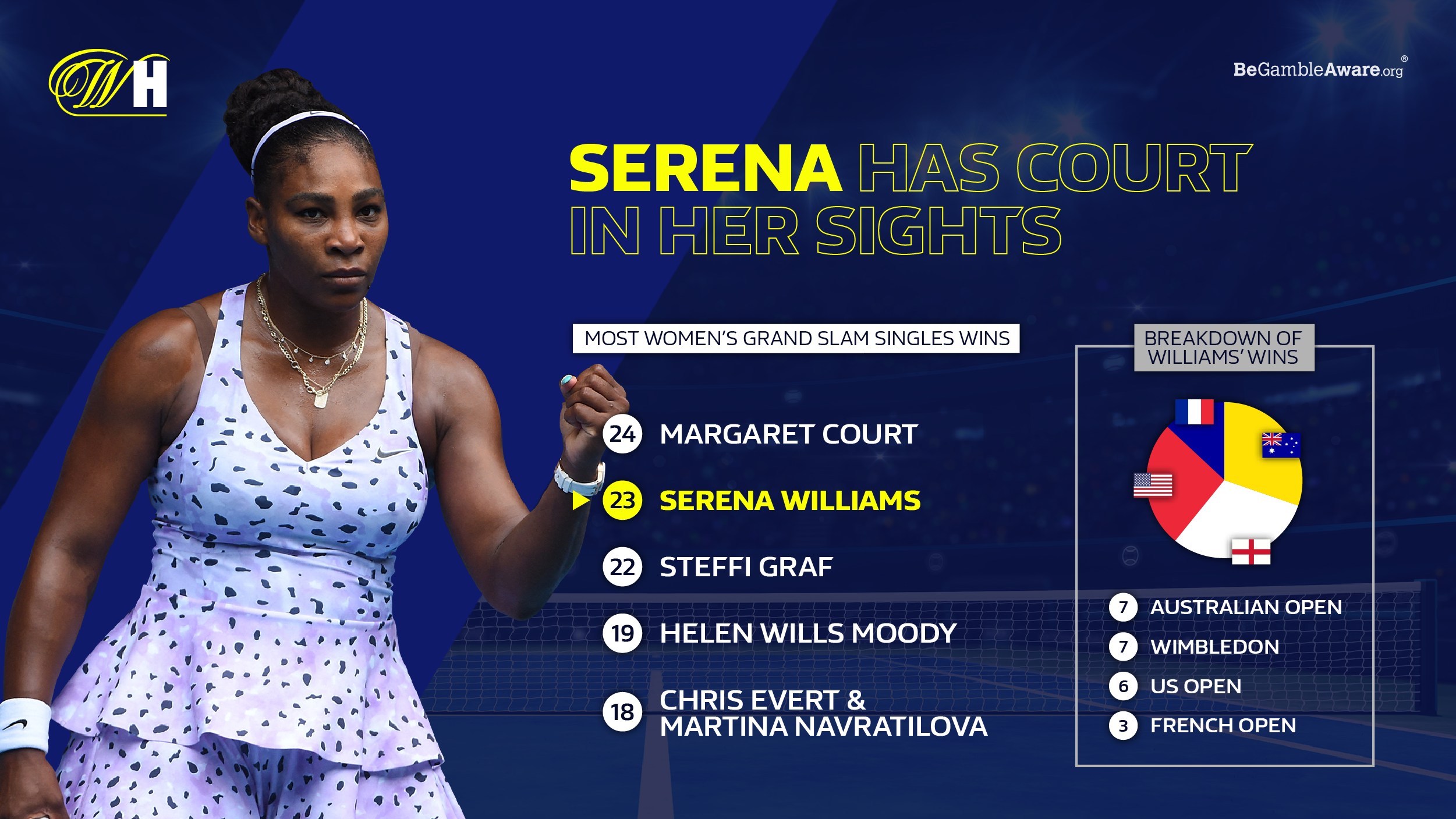 Just below Williams and Court on the list for all-time women’s Grand Slam singles wins with 22 is ‘90s favourite Steffi Graf.

While she’s still one win behind Williams and a couple behind Court in terms of majors, Graf ruled the number one spot for a remarkable 377 weeks, more than any other player in the history of the game.

Graf is also the only player to have won all four Grand Slams and Olympic gold in the same year, known as the Golden Slam, and conquered her generation just as significantly as Court did in the ‘60s and Williams has done since the turn of the Millennium.

The greatest female player on black and white television, Helen Wills spent nine years as world number one and totalled 31 Grand Slams when accounting for her 12 doubles wins alongside her 19 singles triumphs.

Wills was a big hit at Wimbledon, where she gained eight titles, a feat not surpassed until 1990 when Martina Navratilova won her ninth.

As competition was arguably less fierce in her era, Wills has been described as the most dominant female tennis player of the 20th century and deserves her place amongst the game’s elite.

Making it into the top five for all-time Grand Slam female singles wins, and six clear of the great Billie Jean King (12), are Chris Evert and Martina Navratilova with 18 each.

Evert had every chance of being higher up this list too having lost 16 of her 34 Grand Slam finals, more than any other player to date.

Navratilova is considered by many as being history’s best all-round tennis player, having won a remarkable 31 major doubles titles to add to her 18 Grand Slam singles titles. That total of 59 Grand Slams (singles and doubles combined) remains a record.