The third and final day of racing at Aintree sees the Grand National – one of the biggest betting races in the year. It’ll draw huge TV audiences, not just around the UK, but all over the world as people tune in to watch.

The Grand National is due off at 5:15 with 40 runners and riders facing the marathon trip that tests stamina and jumping ability. And, we’ve got the latest odds and race specials.

There are five races before the Grand National, including the Maghull Novices’ Chase and the Liverpool Hurdle, while the Weatherbys Standard Open National Hunt Flat Race concludes the meeting.

Here’s a quick rundown of a few key runners for this year’s race.

Cloth Cap (Jonjo O’Neill) – Put in a dominant display of jumping to make all in the Hennessy at Newbury. He’s also well-in after winning Premier Chase at Kelso last month.

Burrows Saint (Willie Mullins) – Won the Irish Grand National as a six-year-old and was well-touted for the race 12 months ago.

Kimberlite Candy (Tom Lacey) – Has form over the Grand National fences – he’s finished runner-up in the last two renewals of the Becher Chase.

Magic Of Light (Jessica Harrington) – The runner-up in 2019, so brings form over track and trip to the table. 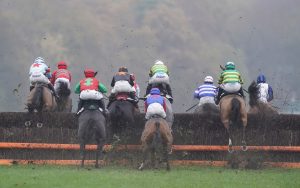 The Grand National Course at Aintree

Jumping is the name of the game, so the 30 fences will provide different tests to this year’s runners. A number of fences have names, lined with Grand National history.

For example, there’s Foinavon – named after the 1967 winner. He managed to avoid the chaos that played out in front of him to win at 100/1.

The Canal Turn is a unique test with jockeys aiming to find the best racing line to negotiate the 90-degree left turn. And let’s not forget The Chair. It’s only jumped once over the two circuits, but it’s one of the tallest fences the runners will have to clear.

Tiger Roll made history by becoming the first horse to win the Grand National in back-to-back years since Red Rum. Sadly, he’s not in this year’s race, but second from 2019, Magic Of Light, could go one better.

Elsewhere, British trainers claimed four of the first five races with If The Cap Fits winning a thrilling Liverpool Hurdle, getting the better of mares Roksana and Apple’s Jade.

Here’s how the day played out: